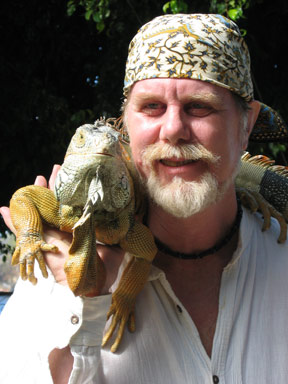 Leonard Filgate is best known for his illustration art for the series of children’s books and images he and his wife (Susan Yost Filgate) created, Rip Squeak® and Friends. But before he set upon the journey as the illustrator of Rip Squeak® in 1997, he worked as a fine artist in a large variety of genre, including marine art, fantasy art, landscapes, cityscapes, toy still-life paintings, theatrical backdrops, and reproductions of traditional Japanese screens.

As the artist creator of Rip Squeak® and Friends, Leonard has been honored as the featured illustrator for the 2003 Los Angeles Times Festival of Books and with a one-man show at the Delaware Art Museum (DelArt.org) in Wilmington, Delaware. Leonard is also included as one of the children’s book illustrators in the Simon Wiesenthal Museum of Tolerance’s Every Picture Tells a Story exhibition that was described as “a celebration of diversity and tolerance as portrayed in illustrated children’s books.” (The exhibition has also traveled to the Bremen Museum in Atlanta, the Spertus Museum in Chicago, and the Indianapolis Children’s Museum, and others in North America.)  He more recently had work included in an exhibition entitled Imaginary Worlds at the Fresno Art Museum in Fresno, California.

He is the illustrator of four children’s books, two children's board books, an activity book, and is the featured artist and illustrator in two art books and one museum catalog. His images appear in well over sixty limited print editions, including fifty plus for Rip Squeak® (many of which are sold out.) His second children’s book, The Treasure was a finalist for an IPPY award in 2003 and a revised version of Rip Squeak and His Friends received an Honorable Mention IPPY Award in 2006. Over 500,000 Rip Squeak® books in seven languages (English, German, Spanish, Faroese, Greek, Arabic, and Chinese) have sold to date. His Rip Squeak® art and books have been sold on the Internet and in galleries and bookstores across the US and in Canada.

Leonard was inducted as an artist member into the Society of Illustrators in New York City in 2006.

As a professional artist, Leonard Filgate has been refining his work for over 50 years. He is a self-taught artist, with no formal training beyond high school. The majority of his art education came from life experiences, his own studies of the great masters, and his unwavering determination and diligence to learn and succeed.

Leonard was born and grew up in San Francisco, California in 1947. Throughout his childhood, when he wasn’t roaming the beach and parks with his friends, he’d spend hours in his room drawing and painting. He sold his first painting at age 16.

After high school, Leonard joined the United States Merchant Marine and continued his art studies through observation while traveling throughout Southeast Asia, the South Pacific, and the Mediterranean. Shore-side, he lived in both San Francisco and New York City. After five years at sea, he left the Merchant Service and dedicated his energies to his own personal study of art. In 1977, he met Susan and began a new chapter in his life.

Before starting on the RIP SQUEAK® project in 1997, Leonard had sold numerous paintings to individuals, including commissioned work. He taught art privately, at a school in Monterey, California and at the Naval Air Station in Alameda, California. He completed several commissioned paintings for the United States Navy, one of which became a limited edition print. He worked on props for a Warner Bros. Television pilot and occasionally did storyboards and backdrops for commercial video and television studios. He has exhibited and sold works in numerous galleries and in shows throughout the United States and Canada.

He was co-founder of Rip Squeak, Inc., an art and book publishing company which closed in 2010. He and his wife Susan recently revived the Rip Squeak® brand and are planning to republish revised versions of some of the out-of-print books and some new books, in both Spanish and English through Cotton Candy Books®.

Today, Leonard's work is collected by thousands worldwide and is held in both private and public collections.

Leonard Filgate has been married to author, Susan Yost Filgate since 1979. The Filgates have one adult daughter. They live and work in Central California in a wonderful old house.